He showed up in Washington, DC in 1969 shortly after the 1968 riots had devastated the town.  Jim Vance was one the first of new media personalities to join the team of Kids In Trouble (KIT), my non-profit organization.  Max Robinson was the pioneer at Washington, DC NBC affiliate WRC TV 4 before Jim arrived but he joined the staff at rival WTOP TV in 1969 and Jim followed him to the Channel 4 News desk.

I loved me some Max Robinson, but he was so moody you never knew which side of the bed he got up on that particular morning.  Despite his mood changes he loved his people—there was never any doubt.

The Original KIT Dream Team was made up of my homeboys, TV/Radio Host Petey Greene, Dave Bing (NBA), Willie Wood NFL) and me.  We would later be joined by DC Superior Court Judges, Luke C. Moore, Harry T. Alexander and Bill Raspberry of the Washington Post.  Washington Redskins, Roy Jefferson, Larry Brown, Harold McLinton and Ted Vactor would join the team in 1970 and community give back changed forever.  The NFL, NBA and MLB would follow our lead. 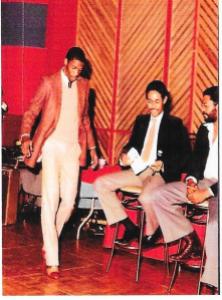 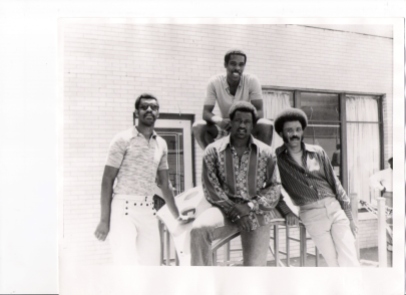 Jim and Petey had a lot in common, they both had my best interest at heart.   Petey was a radio and television icon and we had been life-long friends.  He and I were already locked into the community.  Petey gave me my first shot to become a pioneering radio sports talk show host in 1970 and in November 1975 Jim made it possible for me to become the first black to host and produce his own television sports special in prime time on NBC affiliate WRC-TV 4.  My special guest was Muhammad Ali.   The show was titled “Spotlight on Sports” Jim convinced the brass at WRC-TV that the show was worth airing.

Thank you Jim Vance for opening the door.

Petey, Jim and me would become like the three musketeers when it came to reaching back to enhance the growth of inner-city children in DC.  Jim hailed from the city of Philadelphia known as the city of “Brotherly Love” and he brought the love with him.  He and I became like brothers and no matter what the community endeavor, celebrity fashion shows, tennis tournaments, toy parties or support for the Roy Jefferson Reading Center—he was there. 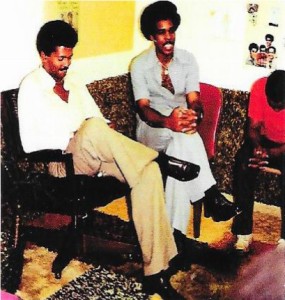 Jim and Harold at The Roy Jefferson Reading Center on K Street, NW with students 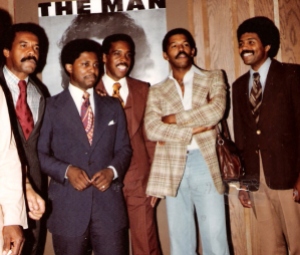 Robert Hooks, Eldridge Spearman, me, Jim Vance and Derrick Humphries hanging out at the Chapter 4 Nightclub in SE DC 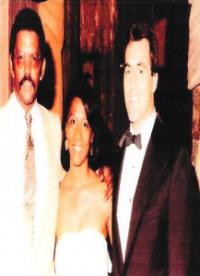 When a confused Sugar Ray Leonard was still trying to find his way, it was Jim who joined me, Robert Hooks, Sonny Hill and Willie Wood at the Department of Recreation & Parks’ to meet with Director Bill Rumsey asking him to help Ray get a job until he could get his act together.

When Ray got his act together it was Jim who helped me to coordinate a bus trip to Baltimore to support him in his pro debut and the rest is boxing history. 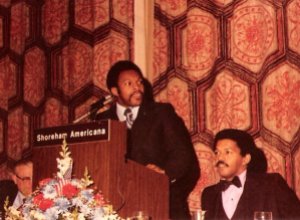 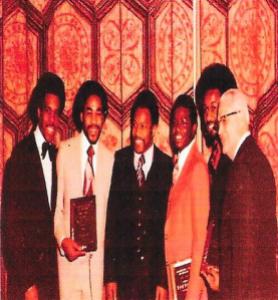 Jim loved to play tennis even though he was not that good.  We became partners on the tennis courts, when he found the time in his busy schedule.  I was right handed, but I would play him with my left hand to make the game competitive.  I think that was one of the reasons I never developed a backhand, I would switch to my left and hit a forehand when I should have been hitting a backhand.  The games were fun and great exercise for both of us. 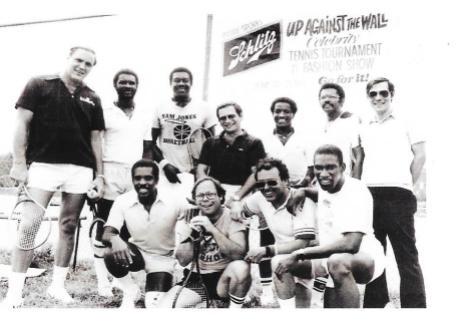 Inside Sports Celebrity Tennis: Jim Vance and the Usual Suspects at Anacostia Park in SE DC

It was easy to like Jim Vance.  He was a people person and everyone was treated like his friend.  His special gift of loving children was understandable.  He was a school teacher in Philadelphia.

Watching Jim on the evening and nightly news was very inspiring, especially when it came to his commentaries.  I would go up to the station in the evenings and sit down and watch him write his commentaries.  He would then read them to me for sound effects.  This was a special skill because his writing reminded me of a definition I learned while working for the Department of Defense at Bolling AFB in the 70s.  I kept clashing with the Base Commander named Erickson, he hailed from Texas and acted like it when it came to communicating with minorities.

The Vice-Commander was really a class act pulled me aside one day and asked to meet in my office the following morning, I said okay.

The next day he came in and sit down and explained to me that I was too important to DOD and the community to keep going up against the Base Commander.  He then pulled out this poster that had a picture of the Devil with a long spear in his hand and it read “The Definition of Diplomacy”,  ‘Being able to tell someone to go to hell and have them looking forward to the trip’ that is how all of Jim Vance’s commentaries read and sounded.  He taught me while writing a story it had to have a flow and continuity.  That was the secret to him being an amazing writer and story teller. 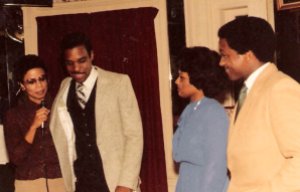 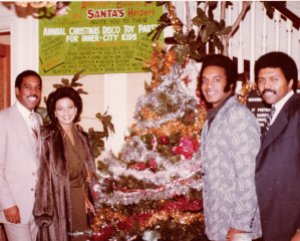 In 1983 our relationship went to hell in a hand basket because of his drug abuse.  The drug community in DC is a very small community and if you are using drugs everyone in the streets knows who you are.  I tried to look the other way when it came to Jim, but one evening I could no longer look the other way.

One drug dealer brought a check to me that Jim had written for the drugs, it was then I realized how deep he was in.  The drug dealer gave me a copy of the check and asked me to talk to Jim about getting some help.  He explained that he could not tell him to stop using because this was his business and business was good.  This brother was known on the streets as a selfish and cold dude, but he showed compassion for and confessed he really liked Jim Vance.

The next day I waited for Jim to make his exit from the station after the 11:00 pm news.  We went to a nearby restaurant to have a sandwich and a cold beer.  I didn’t want to spent a lot of time making small talk.  I immediately showed him the check his drug dealer had given me.  He took the check and left the restaurant.

When I told the drug dealer about Jim’s response, he was as surprised as I was that he would react that way to someone who was trying to save his life.  Jim and I were like passing ships in the night for the next two decades because Jim didn’t speak to me for the next 20 years.

I will never forget in 2007, I rescued an autistic little girl off of the subway tracks at the Potomac Avenue subway station in NE DC.  I emerged from a train and saw her lying flat on her back looking up and not moving.  My instincts told me to jump down on the tracks, but an Amtrak employee advised me against that tactic saying the third rail would electrocute me.  Together we laid down flat on our stomachs and reached out to her asking her to give us her hand, but she just stared at us.  Suddenly I looked down and notice the warning lights were blinking, meaning a train was approaching the station.  I broke out into a cold sweat and hollered at the top of my voice, “Give me your goddam hand”.  She reached up and gave us her hand and we pulled her to safety seconds before the train pulled into the station–talking about a surreal moment.

The next evening NBC affiliate WRC-TV 4 covered the story and the anchors were Doreen Gentzler and Jim Vance.  Doreen excitedly read the story saying what a heroic act it was–Vance looked dis-interested making like he never heard of me.  Hattie looked at me and I just laughed. 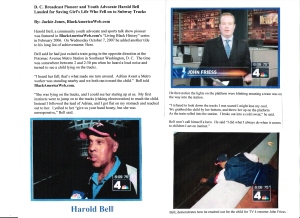 Doreen Gentzler covers the Potomac Avenue Subway rescue on the evening news and Jim shows his love–like he never heard of me.

The next time he spoke to me was at a tribute to sports talk show host Glen Harris on the campus of Howard University.  On his entry into the room I was standing talking to several of the guest and he walked by and said, “Hey Harold Bell”, I was surprised and never responded.

The next time I saw him would be at the re-opening of the renovated Howard Theater in 2012.  He was covering the opening of the theater for the news station.  He spotted me and came over and said, “Lets do lunch, give me a call so that we can set something up”!  Hattie and I stopped by the station one day while we were in the neighborhood.  He came out of the studio to greet us and he gave me a date for lunch and never followed up—I let it go.

Marion Barry and Jim Vance had a lot in common–they were leaders in their chosen fields of politics and media, but they were never able to conquer their demons.  The two of them had something in common with me, I tried to warn Marion that the “Feds” were trying to set him up, but he didn’t listen and his final cry was “The bitch set me up.”   Jim ignored my warning and quietly slipped away.  R.I.P. my friends you did it your way. 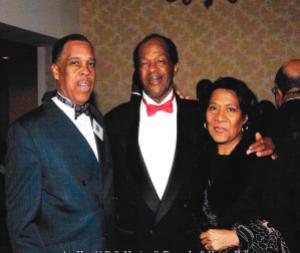 Harold Bell is the Godfather of Sports Talk radio and television in Washington, DC.  Throughout the mid-sixties, seventies and eighties, Harold embarked upon a relatively new medium–sports talk radio with classic interviews with athletes and sports celebrities.  The show and format became wildly popular. Harold has been an active force fighting for the rights of children for over 40 years with the help of his wife through their charity Kids In Trouble, Inc.   To learn more about Harold Bell visit his official website The Original Inside Sports.com.

Blackonomics: Reciprocity in the Marketplace by Jim Clingman

The Ramey Commentaries ™ – Bullies and Cowards: The Real Deal

Speak The Truth–For Black Men Only

10 Rules of Survival If Stopped By The Police

The Manhood Line: The Gold Files™ by Mike Ramey

Fight The Power with Ice Cube? Or Be A Spook Who Sat By the Door! By Harold Bell