January 2020 marks twenty-seven years since the death of Supreme Court Justice Thurgood Marshall and November 2020 marks twenty-six years since the death of DC Superior Court Judge Luke C. Moore.  They were two GIANTS when it came to challenging the system as it related to Justice & Just-Us in American Courtrooms.  I would be re-missed if I didn’t mention DC Superior Court Judge Harry T. Alexander in this same paragraph and in the same breath as it relates to Justice & Just-Us!

The reason I was so successful in my work with youth gangs and at-risk children was because Judges Moore and Alexander had my back when came to our community.  Judge Moore was the first modern day Black American to be appointed U. S. Marshall in-Charge of the U. S. Marshall Service in America.  He was appointed by my mentor President Richard M. Nixon.  In 1877, Frederick Douglas was the first black to hold the office.  He was appointed by President Rutherford Haynes and then approved by the Senate.  Douglas was also the first black to be honored with a Presidential appointment, but his power of authority was limited to Washington, DC (Whites were not subject to arrest). 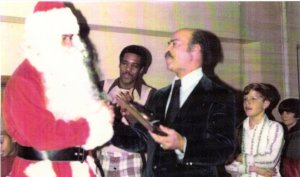 Black Men In America.com Ranked #15 Among the Top 25 Black Magazines & Publications on the Internet

“Speak The Truth” Talks NBA: Whose The Greatest NBA Player of All Time?

28 Sites of Black History Every American Should Know

The Ramey Commentaries ™ – Bullies and Cowards: The Real Deal

The Power of Meeting A Stranger by Gary A. Johnson

Sidney Poitier — Nothing But Class